In 1952 a committee of the citizens of Surat called The Diwan Bahadur Gandhi Smarak Fund Samiti was formed for raising a suitable memorial for the services of this man who had worked incessantly to give Surat its distinguishing character. The committee collected about Rs. 80,000 and in the first place installed a fill-size bronze statue of Diwan Bahadur Gandhi in the front garden of the Sir Kikabhai Premchand College of Commerce at a cost of Rs. 20,000/-.

The aims and the objects of the Institute were to organize instruction in Post-graduate Courses and to plan, promote and conduct research in all subjects of higher learning in Arts, Science and Commerce, but particularly in Economics and Commerce with special reference to local or regional problems, Indology, Sanskrit and Gujarati language and literature. To begin with the Institute was housed in one of the rooms of the Lady Kikabhai Premchand Libraruy and a Committee of Management was formed to look after and supervise the working of the Institute. The first Committee, to work for not less than three years consisted of Prof. V. R. Trivedi, Prof. J. T. Parikh, Prof. M. S. Desai, Prof. R. K. Patil, Shri J. C. Clerk and Prof. V. K. Nimkar. Prof. V. R. Trivedi was appointed the first Honorary Director of the Vidyabhavan and Prof. J. T. Parikh was appointed the Honorary Secretary. 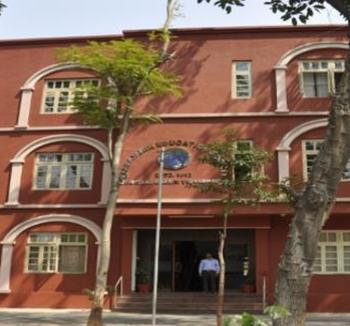